Oh how I WISH

My kids would sleep in when they go to bed SO late!!!!!! But that's not the case! DJ was bouncing awake at 7:30 ready to go!!! And SamSam was soon to follow!! We were all up and at 'em by 8:30!! I knew I had Avon to deliver today and I needed to finish up the grocery shopping as some of the stuff on my list were weekend sales...just to add some pressure! lol

We three (Howie stayed home to do the lights) took off about 10 am and headed for Lynnwood...I had 6 stops to make and they were all under 5 mins a piece! Gotta love it! We were back on the road to Monroe for 11:45 and so we stopped at Safeway and Albertsons to finish the groceries! YAY!

Unfortunately it meant a late lunch...which makes for a cranky mom and kids! They did nibble on some grapes at the store...and I was mean and wouldn't let them have a cookie at either place!

Finally got home at 1:30 and I set to making lunch right away! It was a struggle to get DJ in the house to eat...but he did finally come in...and ate with his coat on...what a nut! He was afraid I wouldn't let him go back out...kids!

Once he was nicely outside playing, I put Sam down for her nap...a rather short one! Howie was up on the roof and I think his walking around woke her up...or scared her as she was SCREAMING for me to come get her. This short nap made her extra whiny! Aren't we lucky!?!?!

Dinner was WONDERFUL!!!! I had 2 yams left and instead of just baking them (which is my fave!!!) I went to recipezaar.com and checked to see what they had...and this is what I found! I can't tell you enough how YUMMY they were!!!!!!!! Howie thought there were great, but wasn't nearly as enthusiastic as I was! I just love Balsamic vinegar, so that was my hook! Here they are right out of the oven! I could devour the whole pan by myself!! 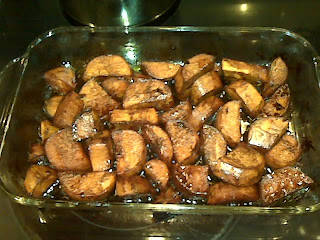 Oh, before we ate, Howie came in from outside and we took the kids outside with their eyes covered to show them the lights of the house...DJ thought that was pretty neat! And his mouth dropped open when I let my hands go...and his "WOW" was perfect!! This what he saw! 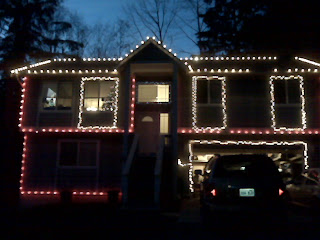 but its not the final product...Howie says there's still lots to do!!! And when he's finished I'll take a picture with the real camera!! You can't see them, but the window above the door, has blue lights on it in honour of the 4 fallen police officers we had last weekend! Such a tragic loss!!! Senseless too!

After dinner I bathed the kids and they were both in bed asleep by 8:15!! Howie too for that matter!!! He's seriously almost ready to give the cats up...the clawing at the door has GOT to stop!!! And I like the door closed when we're sleeping...I like the absolute darkness of our room!!! *sigh*

Now, I'm going to go sit and knit a bit...therapeutic don't ya know!!! Oh, but before I go, here's a few pix from last nite's soiree that I nabbed from other FB peeps that Howie works with! 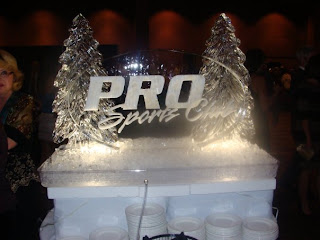 a few of the desserts 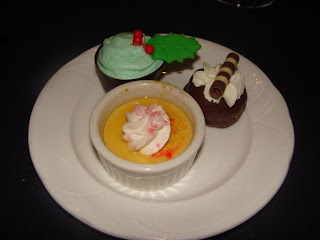 and the centerpieces on the table...bummer I didn't win one to take home! They were GORGEOUS!!!!! 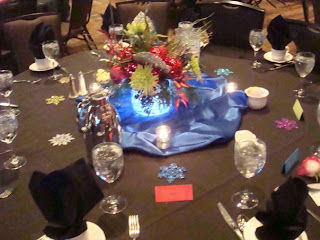 Thanks SO much for dropping a line!

17 and knows it ALL!!! Just ask! He lettered in Football again this year and we're quite proud of that! His latest report card had all A's and one B!!! SO awesome!!!

5 years old now and in Kindergarten....LOVES every day there and is learning all sorts of new things!!!!! Also playing flag football for the first time.