The proof is in the pudding

This actually has two meanings for me tonite....I'll get to that in a minute!

I did something today and from the very first moment regretted!! I almost wanted to cry and throw up at the same time once my decision was made...there was no turning back........

DJ went for a hair cut this morning and since he was tolerating the clippers so well, he gets a "2" on the back and sides and finger length on top, I said, do it all with the clippers and see how he does....STUPID mistake!!!!! It wasn't a 2 all over, but a 2 on the sides and back and a 3 on the top. THERE IS NO DIFFERENCE between 2 and 3 really!! Maybe an 8th of an inch!! Oh my poor baby boy looks bald!!!!!  He looks like his Daddy BIG TIME now!!!! I swear, he grew up 2 years right in front of me!!! The top must have lost an inch and a half!!! I was mortified!! I will NEVER do that again!!

Howie LOVES it of course!!

So, his 4 yr pictures will be waiting a while yet....and no, I haven't taken a picture of it yet....Howie has of course. This was taken with his phone. 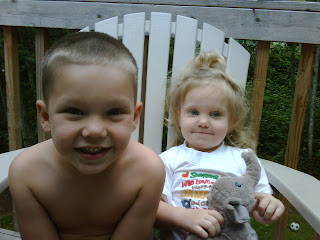 So, while DJ and Sam were playing with Anneke's kids, I got my bangs trimmed and my eyebrows done. Whew! I was due too!! On both counts! Then we had a good chat about whatever!!! Her next clients showed up at noon and we took off about 12:20 after meeting them. Nicole is another gleaner, so it was nice to put a face to a name! Then we stopped by the trailer on our way home, after we kidnapped Travis to come play with DJ this afternoon. They're both missin the kids next door! Big time!!!

When Howie got home he had a one track mind....air conditioner!! You see, they're promising us a heat wave by the end of the week! Should be 91 by Friday....I'll believe it when I see it...especially since today was 52!!! In any case, we're prepared now!! Howie also figured out how our cheap blinds work...they can't be facing up or down, but open and then they'll slide up and down easily! D'oh!!

While I was bathing the kids I made some rice pudding...remind me NOT to do that again!! I can't monitor rice pudding AND bathe the kids! What was I thinking?!?!!?! I only burnt the bottom a bit, and managed to save most of it! Its still very tasty...but missing raisins...didn't have any on hand.

Once Howie went to bed I got comfy and watched the Bachelorette!! I was primed for some juicy-ness!!! I knew about the Jake and Vienna interview....I almost wanted to fast forward the dvr to the interview and watch it first!!! I was on pins and needles with the excerpts they were showing throughout the B'ette!!! I gotta say, I'm SO glad she let Ty go!! He just wasn't right! I see the final two coming down to Chris L (my pick) and Roberto...Frank is gonna screw it up for himself according to what I've read and seen in previews. Stupid Boy

!
Now, for Jake and Vienna....WOW!!! Did they air their dirty laundry or what!?!?!? Shame on both of them!! But thank you both for being such idiots for putting it on tv so that those of us can get a glimpse of the "reality" of reality tv!

Jake, from the very beginning I said she was too young for you!!! Immaturity doesn't come from putting a ring on one's finger and promising to marry them!

Vienna, grow up sweetheart!! And admit you were in it all just as much for the fame as anything else! And from what I've read of your tweets, so what if he went to bed early!!!!! You should have learned to enjoy that time instead of whining!!

Either way, its sad that the break up had to be so public...and that tabloids were involved and monies exchanged for the story. Only goes to prove her immaturity even more! I think both of them are guilty of emotional and verbal abuse based on what I witnessed tonite! Not sure how much of it was edited...but either way, they showed their True Colours

. And it wasn't a rainbow!  As always, Chris was fantastic as an interviewer! He should get an Emmy for that one!! "I don't care about your dog, we're here to talk about you two" that just cracked me up!!

So, now that DJ's come out for his midnite pee, its time for me to hit the hay!!!

Til next time...pray for safety for all troops!
Posted by Missy at 12:41 AM

Thanks SO much for dropping a line!

17 and knows it ALL!!! Just ask! He lettered in Football again this year and we're quite proud of that! His latest report card had all A's and one B!!! SO awesome!!!

5 years old now and in Kindergarten....LOVES every day there and is learning all sorts of new things!!!!! Also playing flag football for the first time.